Business as usual at Trident Studios

Here at Trident since 1993 our work in audio has been incredibly varied; good for us so we never get bored and always like a challenge, but even better for our clients as our experience in the field of audio is vast; from ADR to VO records (local, remote and self-produced), and from TV show dubs to multi-lingual flash presentations.

Our studios equipped with Protools & SADiE systems can handle all your voiceover, podcast, ADR or commentary records, regardless of what file/tape format you supply or need back. email us today to find out more.

Continuing our long-term work with Wheeler Dealers, the new season kicks off this autumn on Discovery, check out the show to hear our work and see Mike Brewer and Edd China hard at work making a buck from renovating cars such as a Ferrari Dino, Mini and TVR S. 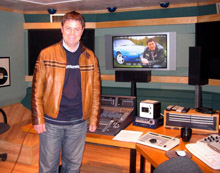 And to compliment the opening of his new stores on October 1st, we recorded and produced an interview between the incredibly successful fashion designer George Davies and Sue Lawley. George is now on his fourth clothing venture, GIVe, after already starting Next, George at Asda and Per Una at M&S.

Throughout 2009 we've had the honour of working with Sir Christopher Lee recording idents for a radio series in America; Mystery Theatre. The series sees Sir Lee introducing stories told by late co-stars such as Vincent Price. Technically the job also required a phone patch for the stateside producer to direct the sessions.